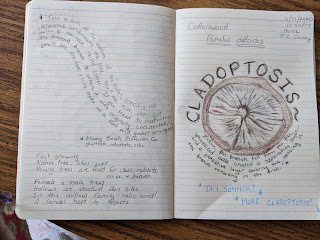 Last time I focused on how everything changes and used the evolution of a forest to support that idea.

I missed another week of my nature journaling last week. 2020 is really forcing some evolution. Covid19 spread and election results that the current president refuses to acknowledge have been consuming me more than I like to admit. Fun things have been occupying my time, too. BTS released another album and music video for Life Goes On and I’ve been on several hikes that have filled my body, mind, and spirit.

Clinging to something. Letting go of something. A tree branch I found in my yard this week is the inspiration for this week’s nature journaling about those important concepts. 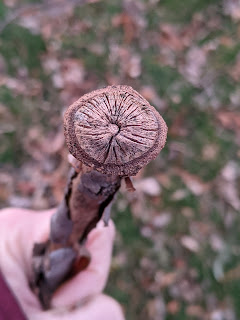 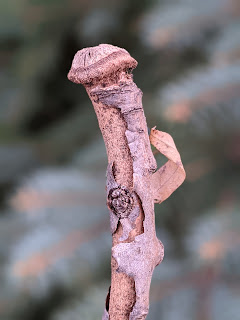 Cottonwoods are extremely messy, fast-growing trees. I was out this week giving my cat some fresh air. As he sat and used his crazy hearing to seek out voles or shrews, I picked up branches. Eventually, I looked at one more closely. It was fascinating so I took some shots. This branch did not break off from the tree randomly. The end was smooth and rounded as if it could be plugged back into where it had been. It reminded me of a giant version of what the end of a leaf looks after it falls from the tree.

Some research today led me to an article about small branch drop in cottonwoods by Mary Small. Sure enough, cottonwoods let go of branches when the tree is stressed- when there’s a summer drought, for example. Although it’s a net loss for the tree, it’s more advantageous for the tree long-term to cut its losses. Before they do so, however, the tree prepares. I am sure the process is similar to what occurs in the annual leaf drop: as many nutrients and water are pulled back into the tree before the branch is jettisoned.

Trees and people can both prepare to let some things go.

The results here were quite beautiful in my opinion. Looking closely (a magnifying glass would be helpful here) I could see cellular patterns within the inner and outer bark. The active cambium layer appears as a dark line right in front of the sapwood. The broken circle in the center is the pith. There are so many different parts clearly evident, but all of them end smoothly in an almost perfect semi-circle.

The tree neatly and efficiently let this branch go.

I learned that this process is called “cladoptosis”. What a fun word! I decided to work it into the visuals of this week’s journaling. I enjoyed transcribing info from the article into my book- almost making the words a branch of the tree. I added more facts about cottonwoods after I drew the end of the branch.

My drawing doesn’t express the roundness as well as I’d like. But slowly creating it drew me in. Other thoughts and worries dropped away as I focused on the patterns and colors I started to see. The cracks were angled fissures. I could see why they formed because of the overall structure of both the individual cells and the overall construction of the branch. The cracks were inevitable. I was impressed by how the bark rounded off and back over upon itself a bit, like a turtleneck sweater. The outer bark still clinging loosely to the branch shows just how dried out it became before falling to the grass far below where it originally grew. 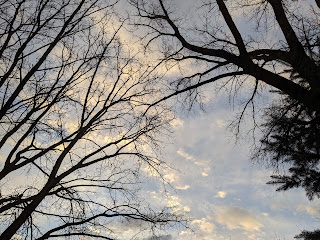 If the tree simply lost that branch, the end would be tattered and oozing precious water, sugar, and minerals. That could lead to invasion by fungi or insects. The tree’s chances to go on for years to come may have been improved by dropping the parts I was picking off the ground that day.

I’m looking ahead to another week now. I hope I can act as well as a tree responding to its environment: growing when I can, reaching out when I can, and pulling in only when it’s absolutely necessary.

Everything does more and has more opportunities that way.

Posted by Susan Baumgartner at 12:56 PM No comments:

Email ThisBlogThis!Share to TwitterShare to FacebookShare to Pinterest
Labels: cladoptosis, Life Goes On 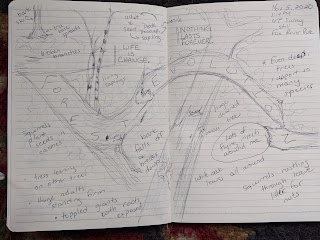 The US elections are over and we are all in a state of adjustment to that. I had done this journaling back on Thursday afternoon before any decisions had been made. I went for a walk to vent some energy, enjoy the unseasonably warm weather, and relax. I ended up meandering over to an old downed tree, where I decided to sit for a bit.

I became aware of being surrounded by every single life stage of a tree. The grey squirrels were pushing through the fresh layer of leaves on the ground, picking out acorns, maple seeds, and hickory nuts. The trunk I was sitting on was the naked skeleton of an old oak. There were broken limbs from its fall all about me in various stages of decay. Emerging from one gnarl were 2 maple saplings no thicker than a couple of my fingers. Above my head, the healthy crowns of other adult aspen, maple, and oak trees were raised to the blue sky, their branches naked in preparation for the coming difficulties of winter.

My rotting tree seat is returning to the soil, providing food for fungi, mosses, insects, worms and more. A beetle landed on my book as I drew and I occasionally brushed aside other flying visitors who flew close to my face. The logs and downed branches about me also provide habitat for mammals and birds through the seasons.

I noticed some living trees were leaning on others. The individuals ARE the forest. There are connections that are so intimate, there’s a blending of one to all. That’s an important concept to grasp. Recent decades of research have allowed us to realize that the forest’s pieces NEED the others. Fungal strands called hyphae actually connect individual trees and carry nutrients and information over distances. We’ve discovered that some trees emit chemicals that allow them to communicate with others downwind. There are many books now about these ideas- one that I read and enjoyed was Peter Wohlleben’s The Hidden Life of Trees.

Life is change, and sometimes the patterns will get completely disrupted. Climate change or fire could catastrophically wipe the forest away, opening the way for other patterns to develop. 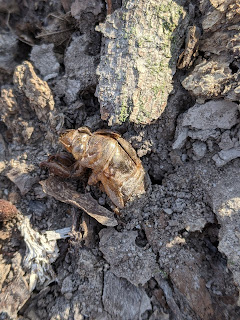 Sometimes these truths can be extremely upsetting to us humans. We like control and to know what to expect. However, sitting in that forest calmed me. As I was leaving, I noticed a cicada shell on my tree seat. It had been there the whole time- I just missed it. That insect lived under that tree in the soil for years before emerging during the summer and shedding that shell before flying away as a full adult. Its life changed through metamorphosis. Its reality changed. The world was basically the same, but its relationship to it changed.

What Does Wind Do? Nature Journaling #11 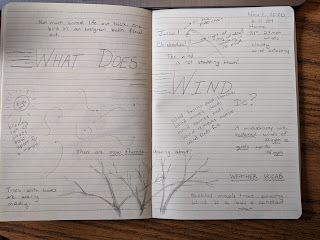 I skipped a week of nature journaling. Yes, I admit it. The alarms went off and I ignored them. That happens. It’s better to admit it and move on. The winds blowing through today are telling that story- relentlessly they push me to change.


I’ve been walking a lot, I just haven’t written. We can get that way: stuck. The winds remind me that there are other times when we must go- when forces outside of us press in with such insistence, they cannot be dismissed.


Weather can be a great focus for nature journaling. It’s not a living thing itself, but it affects everything that is. And in many situations, we give it life-like qualities as we describe it. Weather adds up to climate which develops, maintains, and changes the habitats and ecosystems we see around us. We should be recording the weather as our metadata each time we journal for those very reasons.


Sitting with the weather and journaling about it specifically can lead to all sorts of inquiries and discoveries. Today, I was able to see the snowflakes forecast as they danced about with both dry leaves and the occasional bird. The birds didn’t come into my awareness for a while- I had expected most animal life to be laying low but chickadees and juncos are well adapted to rough conditions and I was able to catch close (but too close to draw) glimpses as they searched for food. In one cottonwood, I saw the drey (nest) of a grey squirrel high above me and wondered if it was tucked inside today. 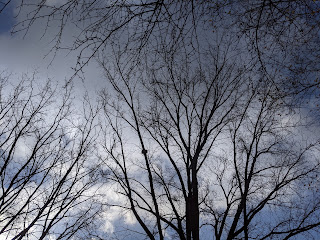 Squirrel drey in center of the image

My question was: What Does Wind Do?

In the 30 minutes I took, I was able to see, hear, hypothesize, and read about a number of things it does. It builds by spreading seeds. It cleans by shaking out dead branches and eroding. It destroys by feeding fires. It changes daily weather conditions by pushing clouds in and out. It annoys by drying skin (personal opinion add-in). 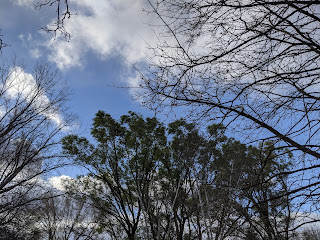 Still-green willows versus other deciduous species


When trees lose their leaves, they become less affected by high winds. In early November in Wisconsin, that’s demonstrable as different species have different drop dates and the conifers rely on other adaptations to stay green and growing year-round. Those that are still green today are swaying wildly while the skeletal ones are merely quivering and rattling.


This weather is a great reminder that anything alive can adapt to its surroundings in some fashion. Humans, squirrels, juncos, junipers, and maples all have physical characteristics that can respond to conditions. That’s key: every single living thing has adaptations. Moreover, most, if not all, can also decide to do things in response to their surroundings.

What we are and what we do- those are the adaptations that help us survive and possibly prosper. 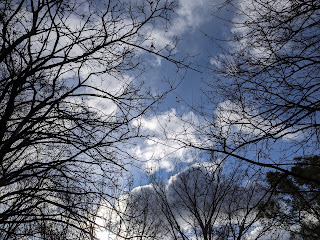 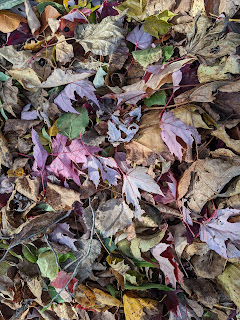 The winds continue to blow. Time continues to tick. It’s a new month and it’s my wish that every single one of us has the time and means to both see and use the amazing adaptations we possess. Hopefully, to help us all prosper.