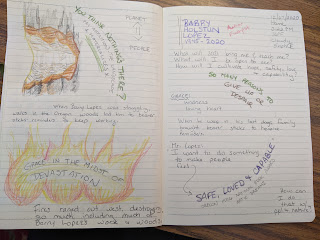 A DORK (Delightful Overthinker of Random Knowledge) friend asked today if any of us had read anything by Barry Holstun Lopez. We had not. Another DORK shared a link to the NPR remembrance they did of him this week, as he passed on Christmas Day after a long battle with cancer. That brief piece inspired me to complete the nature journaling I wanted to do this week.


2020 is almost gone and we typically look back and ahead to what we hope for and aspire to in the coming new year. I have much to say on those in Verbostratis.com but wanted to pull my nature-based thoughts out separately and place them down in my journal and in this blog.


Mr. Lopez wrote extensively and focused on slowing down to notice what is really there. I’ve been doing that with my journaling, but I hope 2021 finds me doing it more consistently and for longer periods of time. Truly seeing. Truly noticing. Truly documenting.


Barry Lopez was intimately aware of both personal and global despair and devastation. Can I demonstrate grace in 2021? Can I not give up? Mr. Lopez spent 30 years on his last book and was inspired by the beaver in his local waterways to keep going back to the tasks at hand. Can I try to help build some things in 2021 that will make others and myself feel safe, loved, and capable as Mr. Lopez hoped to do in his life?


I hope 2021 is a year of light for people. I think it could be a year like an acorn cracking from its shell and sending out that first tiny but vital taproot and leaves to face the elements. Nothing guaranteed. But the potential for some amazing living down the next couple of centuries.


Personally, I hope to savor many sights, smells, sounds, tastes, and textures in wild spaces. I want to spend some time under the stars and in a waterfall. I hope my circle challenges and grows with me. I want to read at least 5 nature-themed books from 5 different authors, including Mr. Lopez.


These are all wishes, not demands. If we can only have one thing, let it be a sense of unity. We can each inspire one another if we understand we’re together. Let’s do this.

Posted by Susan Baumgartner at 4:28 PM No comments: 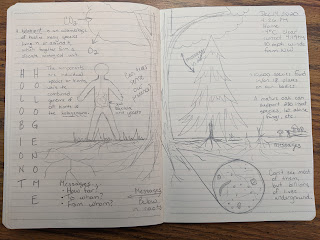 In last week’s essay I focused on my questions about who or what is the reason for this world we inhabit. Some claim it’s all been created for humans with us at some apex of existence. I argued that we’re just a single result of a number of key pieces coming together, none of which would be possible without the sun.

I touched upon some different species, including trees, birds, and fungi all being connected back to the sun. Then this week, two things popped up for me that reminded me of or taught me anew on the big concepts I’m struggling with here.

The first block of information I received this week was a New York Times magazine piece by Ferris Jabr entitled The Social Life of Forests that a friend shared with me. I had read and enjoyed Peter Wohlleben’s NYT bestseller The Hidden Life of Trees and written about it in my main blog in October of 2019 in a piece called Humility From Trees. Reading that essay again is a shocking reminder of what I’ve been wrestling with for so long and how it’s supported by all these other minds. Back then, I didn’t even know Wohlleben’s work was a product of Dr. Suzanne Simard’s pioneering explorations. My loss.

Scientific exploration has revealed that trees and fungi form partnerships known as mycorrhizas. There is actual communication and positive interactions between multiple species within forests. From the NYT article:

“By analyzing the DNA in root tips and tracing the movement of molecules through underground conduits, Simard has discovered that fungal threads link nearly every tree in a forest — even trees of different species. Carbon, water, nutrients, alarm signals and hormones can pass from tree to tree through these subterranean circuits.”

Further research is showing other species in other habitats are doing these things as well.

Jabr’s article does caution that we can’t call all interactions between species and individuals as perfectly commensal in nature. Dr. Toby Kiers, a professor of evolutionary biology at Vrije Universiteit Amsterdam, says reality might be closer to “reciprocal exploitation”. A tension is maintained- together- by the collection of lifeforms, described by Jabr well thusly:

“Such reciprocity does not necessitate universal harmony, but it does undermine the dogma of individualism and temper the view of competition as the primary engine of evolution.”

That friction-filled connection between seemingly separate things is further explored in my second block of information from this week, the November 25 On Being Podcast of Augustin Fuentes: This Species Moment. Fuentes brings up the concept of “holobionts”, a term that was coined in the 1990s by Dr. Lynn Margulis, which describes how every one of us is an ecosystem of a number of species that live together for long periods of time and rely on one another to exist. Fuentes repeats the story of how a human body contains so much non-human DNA that if the human portion could be sucked out, there’d still be enough stuff left to see the human shape we know.

Without that “other”, we cannot function as we do. Our bodies are intimately reliant upon other species to survive. For example, we’ve discovered our gut biome either helps or hinders our overall health and some are calling the gut a “second brain”. Fuentes points out another “other” we need: other people. Fuentes brings up this concept of a “social ecosystem”. I love this quote on what we’ve discovered about how important our connections to other people are for us:

“So that means that over evolutionary time, the bodies, the structures of being human have adapted to and integrated themselves into the system where the social is everything. The psychologist Michael Tomasello says this great phrase: “a fish is born expecting water; a human is born expecting culture.””

This really made me stop to think. We expect culture? We need social interactions? I can grasp the notion because I can quickly list people I depend upon and those I help. Those relationships are extremely important to me and I think of and do things for these people constantly.

I look at where we are today as a country here in the US and see that “social ecosystem” in damaged and fractured forms. From a distance, I can see insulated towers of people, supporting folks they consider “acceptable”, but not an overall healthy network or web that can take hits and weather storms. If we could be a huge, dynamic, and diverse forest ecosystem of 328 million organisms, right now we’re shriveled islands sitting in a horrible desert of distrust.

I am comforted with the knowledge that ecosystems can bounce back when given the opportunity. With purpose and effort, what is still alive can flourish anew. Perhaps even in spectacularly new ways.

So, I’m looking at all this stuff and remembering my now years-long obsession with the phrase “we’re stronger together” and going, “Hmm, isn’t this interesting?” Physical connections. Social connections. Life is clearly not a simple case of “survival of the fittest”.

That belief and operating with that as a guiding principle has caused a lot of pain over the years.

A lot more pain and suffering than believing and living with the idea that there are multitudinous connections and ways we relate to both each other and the entire planet.

That’s why I’ve journaled today on the holobiont and connection.

We really *are* stronger together. Our planet appears to be a working testament to that.

Posted by Susan Baumgartner at 3:17 PM No comments:

Email ThisBlogThis!Share to TwitterShare to FacebookShare to Pinterest
Labels: Augustin Fuentes, Ferris Jabr, holobiont, Humility From Trees, On Being, Suzanne Simard, The Social Life of Trees, The Species Moment, Verbostratis

It's All About The Sun: Nature Journaling #14 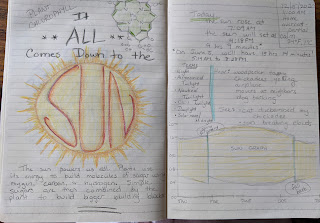 I dispute the idea that Earth revolves around human beings.

None of us- none of THIS (waving arms around wildly)- would exist without that fireball star in our sky. Our world revolves around the sun. That’s why I decided to devote a page of my nature journal to it.


I missed another week of journaling last week. In my defense, I did draw and create. I had a great time creating a holiday card for some folks in the one BTS fan group I belong to. The process helped me think about others around the world and how we’re linked. Another great example of that idea I fall back on: we’re stronger together. 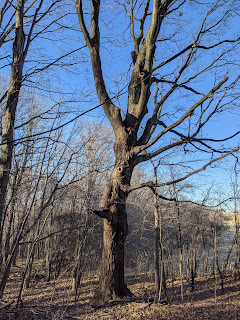 My journaling page covers some facts about sunlight and why it’s THE link to everything living today. My Nature Dork group went for a great hike yesterday and we appreciated some amazing trees that have spent decades building chlorophyll, sugars, and starches. In winter’s reduced light and temperatures, most of them are basically sleeping right now. But, come June when we’ll have about 6 more hours of daylight every day, they will be churning out the products of photosynthesis with gusto.
I love the reality that in places north and south of the equator, our daylight varies over the year. We get our 4 seasons because this planet not only revolves around the sun, we tilt away and toward it. Those details have allowed for a range of habitats and inhabitants to evolve around the globe. 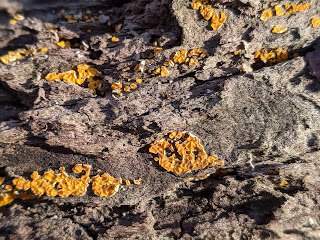 Our walk showed us tiny fungi and insects alive and working. Without insects, we would have few fruits to eat. Insects are great food sources for things like birds and mammals. Without those fungi, trees would never break back down into soil components for new plants and trees to use. And we can’t forget the billions of microscopic lives we can’t see with our eyes. Without them and their operations, who knows what else would perish?
Fun fact: in a teaspoon of healthy soil, there are more microbes than people on Earth. You can read more here. We are learning more and more about these hidden worlds and it’s awe-inspiring.


Humans are capable of a broad range of things. We can build and we can destroy. But are we the apex? To me, that would mean we would stand above and alone.

I find myself saying that's just not the case when we look at the facts. I might be wrong and will have some serious explaining and apologizing to do in the afterlife according to some. I prefer to think we’ve evolved just enough to always be learning what’s here, appreciating it, and nurturing it. We’re kids in a classroom filled with potential and wonder to both discover and share with one another and everything else that's here.


Posted by Susan Baumgartner at 11:46 AM No comments: