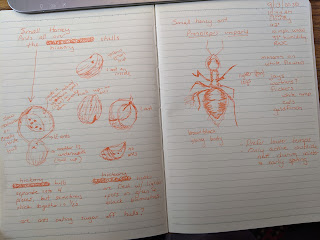 This week’s journaling is all about random. I didn’t even know I was going to journal today- it just happened. I left the house to do one thing and that fell apart, so I decided to walk instead. I didn’t know where to go, so I just went.

Every person has “outside” somewhere nearby. It may not be grand. It may be downright bleak. But there’s life out there. There’s something. It just takes some effort by us to let it enter our consciousness.

I think that’s a valuable lesson. Humans can think we’re the apex- we matter and everything else is less. That way of thinking is not only wrong, it’s dangerously so. We need other living things and the inanimate natural world as well for our very survival. And the relationship is not a one-way street. Humans don’t have to just rely on everything else to reduce our suffering. We can also make everything else suffer less. That’s a powerful concept for another time.

Back to my randomness.

As you’ll see by the pages I ended up with, I began by noting the metadata in the upper corner: date, time, weather. I then began listing some species I saw: a monarch on some white flowers. Blue jays squawking. Flickers calling and flying by, white rumps flashing and goldfinches chittering about. I couldn’t get close to these creatures to dive deeper. I walked on.

Eventually, I stopped at a pile of nut husks in the middle of the trail. I noticed there were ants on one of the husks and sat down on the wet grass to draw what I saw. Drawing what is seen and not what is expected is hard- it takes stepping out of oneself. And my notes on the page are rough- coming back to it while at a desk lets me read up on different hickory species (this was Carya ovata- shagbark hickory) and learn that the “hulls” are better known as “husks”. It was probably a squirrel who plucked the nut from this hickory tree and dug the sweet and nutritious nut out.

The ants interested me as I haven’t focused on a living species yet in my journal. Moving animals are harder to draw, so taking pictures and observing under a hand lens for at least a few minutes can be used together for greater understanding. I was able to note behaviors and question what the ants were doing. Using the phone app Seek on a photo, I was able to define an actual species: Prenolepis imparis, the small honey ant.

I made tons of mistakes.

Drawing in a journal with a pen is unforgiving. That can be hard for some people to accept, but I’m in a mood of not caring and just embracing the errors. Perhaps it’s my fluctuating blood sugar today, but I’m forgiving myself for repeatedly writing “black walnut” instead of “hickory” as I sat there. I admit I had to stop 5 minutes later to correct it when I realized what I had done- I *knew* better. Why did I write that? I have no idea. Meh. It is what it is. My scale was wrong a couple of times. No biggy. I drew over it. I wanted to add more adjectives once or twice- I squeezed them in where I could.

Life’s not about perfection. It’s doing. Today, I just did.

I think that’s the point of my writing and drawing today. Anyone can find *something* to journal about outside. How we respond to that event will be different for each person. Documenting it all may not end up being a masterpiece, but it’s a valuable experience that should be noted. Today, I was able to just do something and accept what came to me, and that feels pretty satisfying. I got some fresh air and quiet, met a couple of people on the trail, and have a journal entry to remind me of the day.

I hope you can get outside. Whether it’s an ant on a sidewalk, or a mushroom on a log, the moment can be fleeting or long and profound. But it requires us to stop long enough to let what will be, be.

Posted by Susan Baumgartner at 11:45 AM